To this day, in international perception the city of Nuremberg is closely linked with the Nuremberg Trials. The Nuremberg Trials were to bring the German crimes committed during World War II to justice. On November 20, 1945, for the first time in world history, leading representatives of a state had to answer for their crimes before an international court. On this day, the "Major War Criminals Trial" against 21 high-ranking representatives of the Nazi state opened at the Palace of Justice in Nuremberg. The International Military Tribunal was composed of representatives of the four Allied powers - USA, Soviet Union, Great Britain and France. The "trial of the century" lasted just under a year and ended with twelve death sentences, three life sentences, four long prison terms and three acquittals.

This trials was followed by twelve other trials that took place between November 1946 and April 1949. Today, the Nuremberg Trials are regarded as an early milestone in the conviction of National Socialist crimes and are a model for modern procedures in international criminal law. 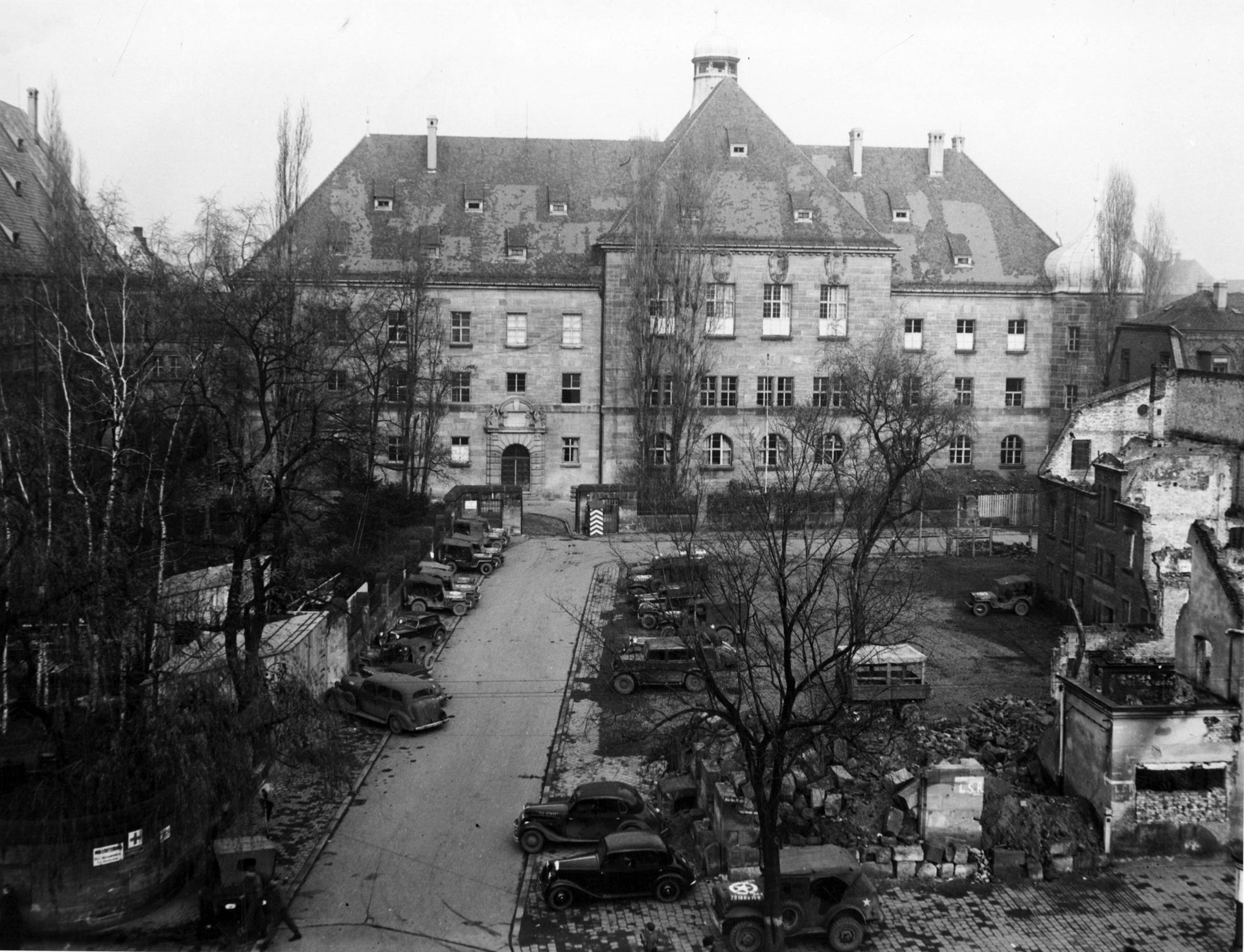 The Eastern Wing of the Nuremberg Palace of Justice.

On the second floor in Courtroom 600, the trial against Major War Criminals took place
– shielded by heavy curtains. 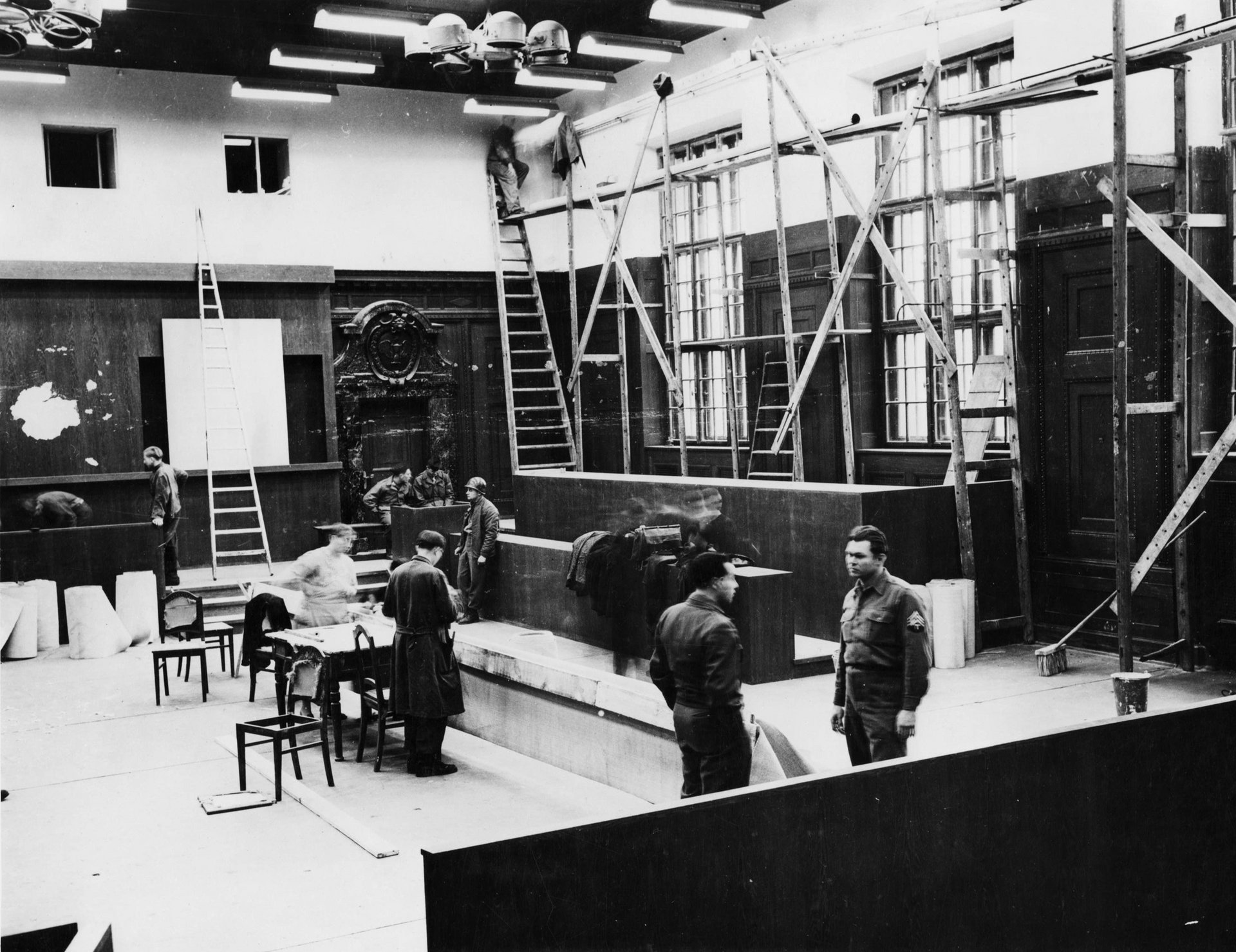 Tremendous construction work were carried out in Courtroom 600 to make it fit the
requirements that came with the hosting such a trial there. 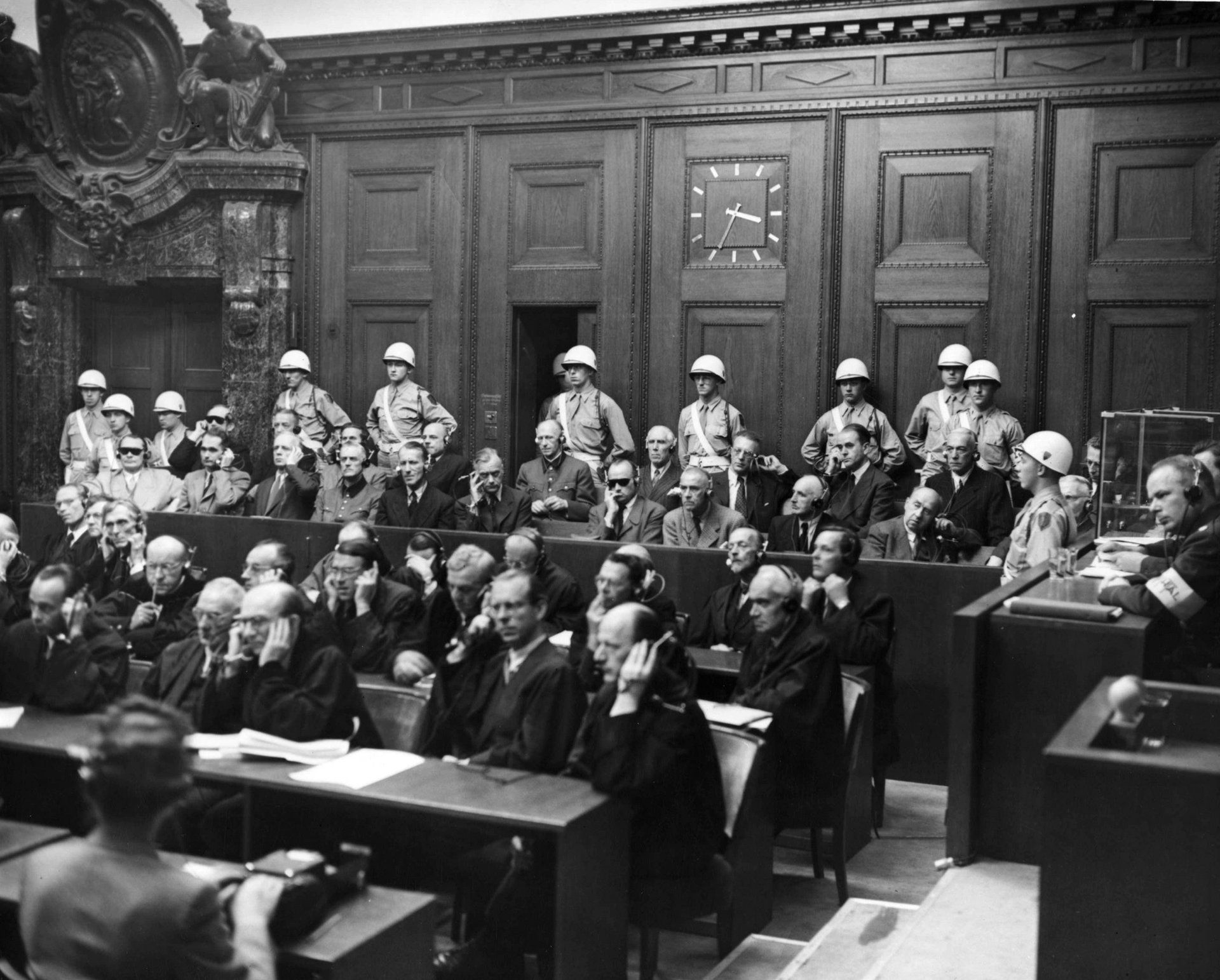 The defendants of the trial against Major War Criminals in Nuremberg.

Behind them, you can see an open door, which leads to an elevator
that brought the defendants to Courtroom 600. 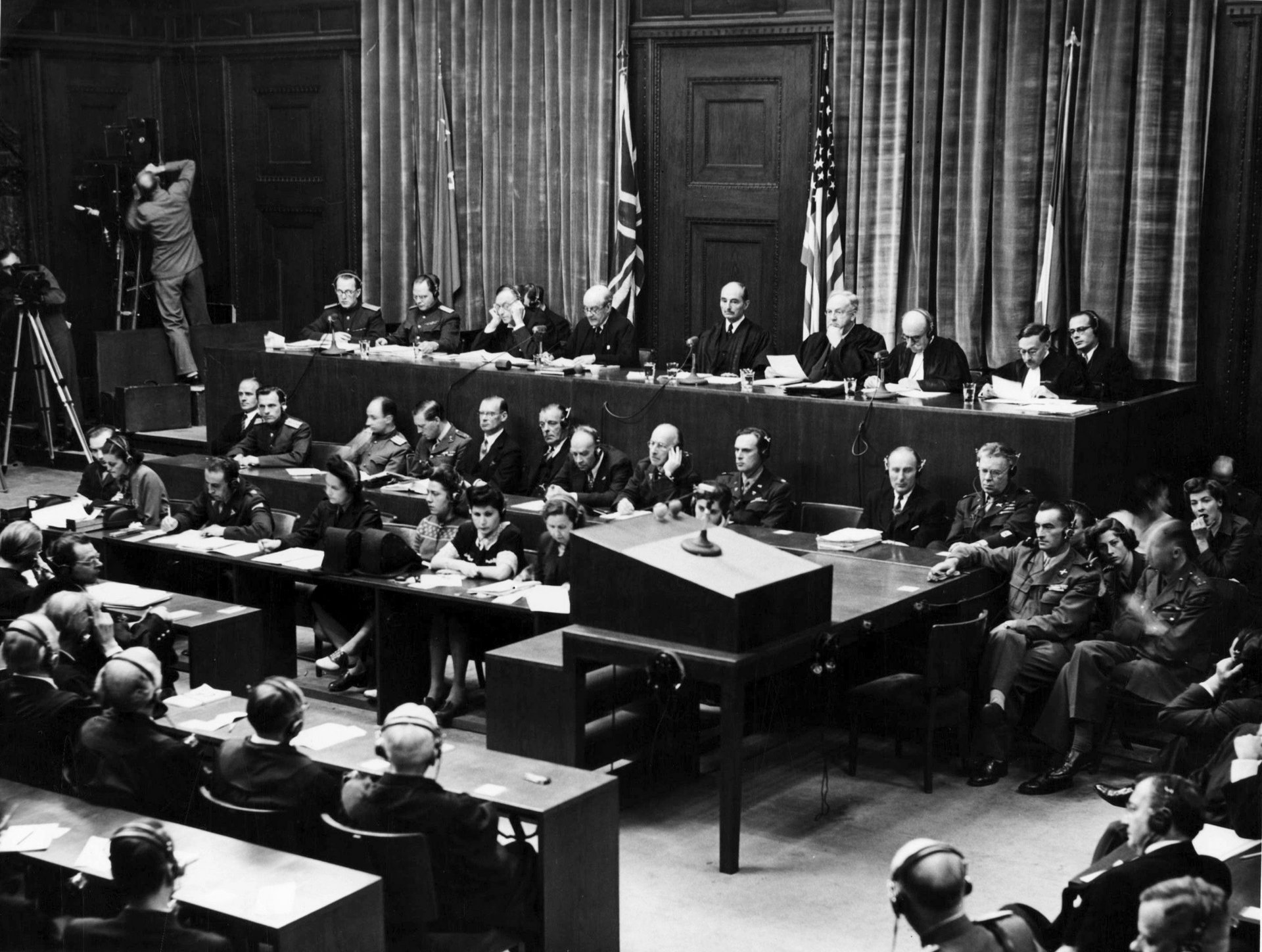 The tribunal during the pronouncement of judgement.

In August 1945, the decision was made in favor of Nuremberg as the venue for the Tribunal. Thus the Nuremberg Palace of Justice and Courtroom 600 became the focus of world attention from the fall of 1945. In the run-up to the trials, Courtroom 600 had to be extensively expanded and rebuilt.

In 1961, the jury courtroom was officially returned to the Bavarian justice. In the following years, the extensive reconstruction measures of 1945 were reversed and the room was modernized. To this day, it stands for the historical significance of the Nuremberg Trials, which makes it the "most famous courtroom in the world". Since March 2020, the hall is no longer used for court hearings and is usually available to visitors.

Evidence of German crimes was already collected during the Second World War. When the decision was made that the main perpetrators should be brought to justice, the prosecutors were confronted with an unprecedented level of crime. In August 1945, the United States, the Soviet Union, Great Britain and France agreed to establish the International Military Tribunal. For the first time in world history, leading representatives of a state were thus brought to justice for the violation of international legal norms. The creation of uniform legal standards for all accused was intended to prevent arbitrary punishment.

"That four great nations, flushed with victory and stung with injury, stay the hand of vengeance and voluntarily submit their captive enemies to the judgment of the law is one of the most significant tributes that power has ever paid to reason."

The prosecutors' primary goal was to convict the accused using their own orders, instructions and documents. After nine months of trial, the sentences were finally read out on September 30 and October 1, 1946, and the trial was brought to an end.

The legal prosecution of Nazi crimes was not supposed to end with the pronouncement of judgement in the "Major War Criminals Trial". Starting on November 21, 1946, various officials of the Nazi state were brought to trial in Nuremberg. The trials were conducted exclusively before U.S. military courts, which between 1946 and 1949 investigated 185 defendants in twelve different trials, the so-called "Subsequent Nuremberg Trials”. The final sentences in the "Subsequent Nuremberg Trials" were finally pronounced on April 14, 1949.

"May it please your Honors: It is with sorrow and with hope that we here disclose the deliberate slaughter of more than a million innocent and defenseless men, women, and children. This was the tragic fulfillment of a program of intolerance and arrogance. Vengeance is not out goal, nor do we seek merely a just retribution. We ask this Court to affirm by international penal action man's right to live in peace and dignity regardless of his race or creed. The case we present is a plea of humanity to law."

Opening Statement of the Prosecution in the Nuremberg "Einsatzgruppen Trial" by Benjamin Ferencz, September 29, 1947.

"And let me make clear that while this law is first applied against German aggressors, the law includes, and if it is to serve a useful purpose it must condemn aggression by any other nations, including those which sit here now in judgment. We are able to do away with domestic tyranny and violence and aggression by those in power against the rights of their own people only when we make all men answerable to the law."